Tim Lund wrote:Sounds as if it was Labour and the Lib Dems taking a principled stand.

I may have missed something, but I can't see where in this blog post it says that it was the Lib Dems and Labour who objected to the inclusion of the Liberty GB candidate. As far as I can see, the blog post simply says that the Conservative, UKIP and Green candidates actively supported the inclusion of TUSC.

Yes - you're right there. Apologies
Top

When I were a lad in a land far, far away there used to be public meetings organised by the parties to show off their charismatics Stuart

I'll leave any judgement on 'charismatics' to others

but I'm happy to take the opportunity to say that, whether the remaining hustings go ahead or not - and I hope they do - TUSC are certainly also organising public meetings during the campaign.

We've one in the Crooked Billet in Penge on Thursday April 30 and one in the upstairs room of the Hob by Forest Hill station on Tuesday 5 May (as advertised on the election leaflet which should be hitting your doormats around now) - both start at 7.30 pm.

I was really looking forward to attending this event and am very disappointed it was cancelled. Perhaps Jim Dowd might care to confirm or deny whether it was he who refused to participate in the hustings and care to explain his reasoning if he did indeed refuse to participate.

As others have mentioned local residents get one opportunity every 5 years to see prospective candidates present what they stand for and debate. If I were organising the hustings I'd find it sorely tempting not to empty chair those that treat prospective members of their constituency with such disdain by refusing to take part. Is there a good reason for the organisers not choosing to empty chair those who refused to take part?

I personally find the politics of Liberty GB odious but when members of other political parties and certain parts of the media refuse to meaningfully engage with representatives from this end of the political spectrum it can disenfranchise voters and strengthen the hand of the far right. It is frustrating and pathetic. It has also changed my view on who I shall be voting for, not that it will make much difference in this ward under the FPTP system. Bring on PR.
Top

A sad day for democracy
Top

I would be interested to hear from Labour if it was indeed them who derailed the event. If so the organisers should empty chair Dowd (would fit with my experience of him), you could always take the “Have I got News for you” approach.

It would hardly be difficult to deal with the wiews of a man who says things like:

“all the brave Englishmen from Lewisham, Sydenham, Penge, Forest Hill, Crystal Palace and beyond, from every city, town and village in Britain”

Plenty of Scots & Welsh came from “city, town and villages in Britain; not just the English. That is before we get to the Irish (& Northern Irish) in the British Isles and the Canadian, Australian, Kiwi’s, Indians, Poles etc who also risked everything too.

Nothing to be scared of there.
Top

If the venues are a problem could I suggest someone picks a park and a moderator and stage an alternative. If someone won't show up empty chair them. The events could be organised at the same times as the cancelled hustings to remove excuses of "diary clash."

This really is a farce if candidates can remove the public's ability to question them along side their challengers.
Top

Penge Forum have just announced the cancellation of their hustings event planned for 29 April.

It's the third hustings cancelled in the Lewisham West and Penge constituency, all because certain candidates from the other parties refuse to engage with Liberty GB, a legally constituted political party.

This latest cancellation is a further disgusting and cowardly snub to local voters, once again denied an opportunity to meet and question their election candidates, and to free speech and democracy.

Re: Greens, Tories and socialists shut down third hustings e

While I agree with them that sharing a platform with low life scum like you would be a pretty nasty thing to have to do (please dont pretend to be supporter of free speech and democrasy!!!I) I do have to agree with you that its a snub to voters. Assuming you have prooof its the Greens Tories and socialists who had it cancelled and its not just you lying again.
Top

I am not sure any of those named have conspired to shut down any hustings, certainly not TUSC.

I hope that a hustings can still be arranged - and understand that 38 degrees are still pursuing a venue.

Tom Chance (Green) going to be on Penge High St next two Saturdays at 11am and invites other candidates to join:

It seems from this thread that there were two immediate causes of the cancellation of the Syd/FH hustings - and, reading between the lines, I guess, something similar may have happened in Penge.

One is that some candidates refused (on orders from HQ?) to share a platform with Liberty GB. (We don't know who those candidates were, but on the SE23 forum Dr Whale names the Tories and the Greens; we've heard on this forum that the Lib Dems and TUSC have said 'not me, guv.') Speaking as a citizen, and as an undecided voter who wants to hear how 'mainstream' candidates respond to views from the extreme left and the extreme right, I, like most of those who have posted here, found this 'no joint platform with racists and Fascists' position very disappointing. It turns Dr Whale into a martyr and makes one wonder how much confidence mainstream parties in their ability to rebut his unpleasant views.

I agree with others that it would be good to hear a response to this here from the mainstream parties, although I doubt whether we shall get one. I suspect that another instruction from their respective campaign supremos (supremoes?) is that they should not waste time during the campaign contributing to community forums like ours - comparatively few voters read them, and the risk of making embarrassing gaffes (all over the papers next day) presumably outweighs any possible gain.

The other reason for cancellation seems to stem from the fact that both hustings were to be held in churches (and, in our case, to be chaired by a Christian minister.) Somebody clearly felt that it was wrong, or at least embarrassing, for the Church to be seen as giving a platform to the representative of an organisation whose views were almost as far as it is possible to imagine from the Christian gospel. (Even though the churches were not, as in previous years in Syd/FH, running the event themselves and were merely offering their assistance to secular organisations, in the hope that this would help promote community solidarity and civic responsibility.)

Speaking as a Christian, I have some sympathy with this view. In normal circumstances it would on the face of it be a toss-up between Dr Whale and Anjem Choudary as to whom I would least like to hear discharging his bile in the house of God. But I think there is a delicate balance to be struck , and I guess Christians could have different views about this.
Top

Can we PLEASE find out who cancelled it and why? Until we know those points there is no use in arguing the toss!!!!!!
Top

Robin Orton wrote:In normal circumstances it would on the face of it be a toss-up between Dr Whale and Anjem Choudary

I might just give Anjem Choudary the political platform:

Good to see you Squashy. I think hes a twunt too.
Top 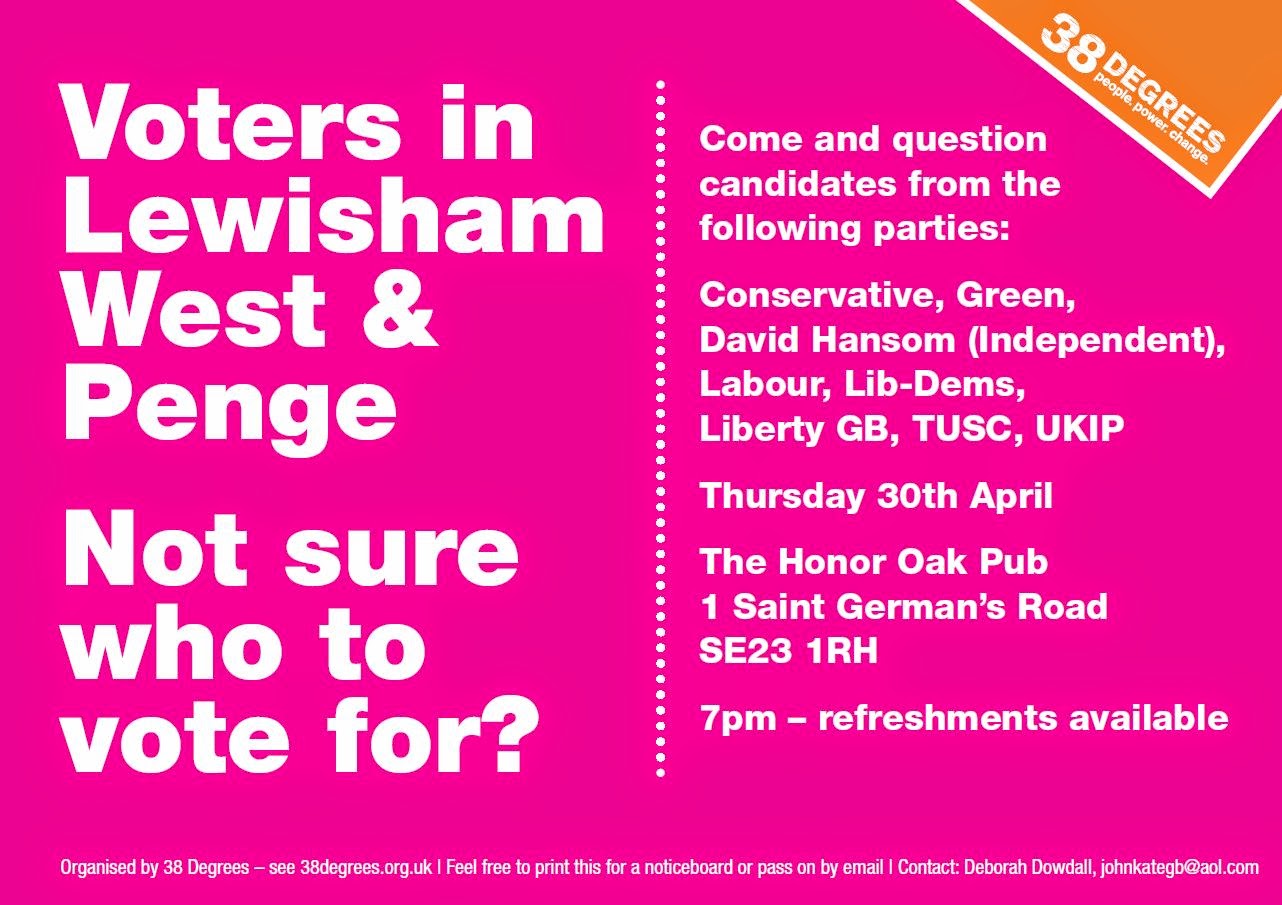 Just to confirm that the '38 degrees' hustings has been confirmed as taking place on Thursday 30th April from 7pm to 9pm at The Honor Oak pub, St Germans Road, SE23 1RH
Top

If candidates start pulling out can we be told who and why this time?
Top

Why did the original ones have to be held in a church?

A pub, Livesey Hall, Sydenham Library or a host of other places seem like good places.

I heard the Lib Dems didn't object to having them take place.
Top

leenewham wrote:Why did the original ones have to be held in a church?

A pub, Livesey Hall, Sydenham Library or a host of other places seem like good places.

I heard the Lib Dems didn't object to having them take place.

I think it was a church hall, not quite the same thing as a church. In either case, a perfectly good venue, I'd have thought.
Top

Does anybody know if we need tickets to attend today's 38 Degrees' Hustings in Honor Oak? I don't want to miss it but I have the feeling the place will be mobbed so I wonder if I will be wasting my time as will be travelling on public transport?
Top
Post Reply
121 posts