The deadline for comments on the current OLSPN planning application is the 23 June. Only a week to go, so don't delay, have your say. Plans are available at https://planning.lewisham.gov.uk/online-applications/, where you search for application DC/19/111793
You can use the online portal to comment, but you can also send an email to planning@lewisham.gov.uk
You must include your name and address, or your comments will not be read.

Lists of acceptable topics for comments include whether the development might have an:

Adverse effect on the residential amenity of neighbours, (noise*, disturbance*, overlooking, loss of privacy, overshadowing, etc. [*not including during the construction process]

• Visual impact of the development

• Effect of the development on the character of the neighbourhood

• Design (including bulk and massing, detailing and materials, if these form part of the application)

• The proposed development is over-bearing, out-of-scale or out of character in terms of its appearance compared with existing development in the vicinity

• The loss of existing views from neighbouring properties would adversely affect the residential amenity of neighbouring owners.

Remember to give relevant examples of ways you are affected by the development for each issue you mention. Just saying 'I object' isn't enough. Whatever your comments, don't forget to have your say. We will be living with the eventual building for decades to come.
Top

I think you will see I kept it absolutely neutral, and supporters can follow the same instructions.
Top

These are the original designs which were given planning permission in 2016, are marked up in blue with as-built changes that the developers need retrospective permission for. They also show some changes they feel might improve the design quality. The whole application is extremely confusing, and hard to unpick, which rather compromises the ‘public consultation’ concept. 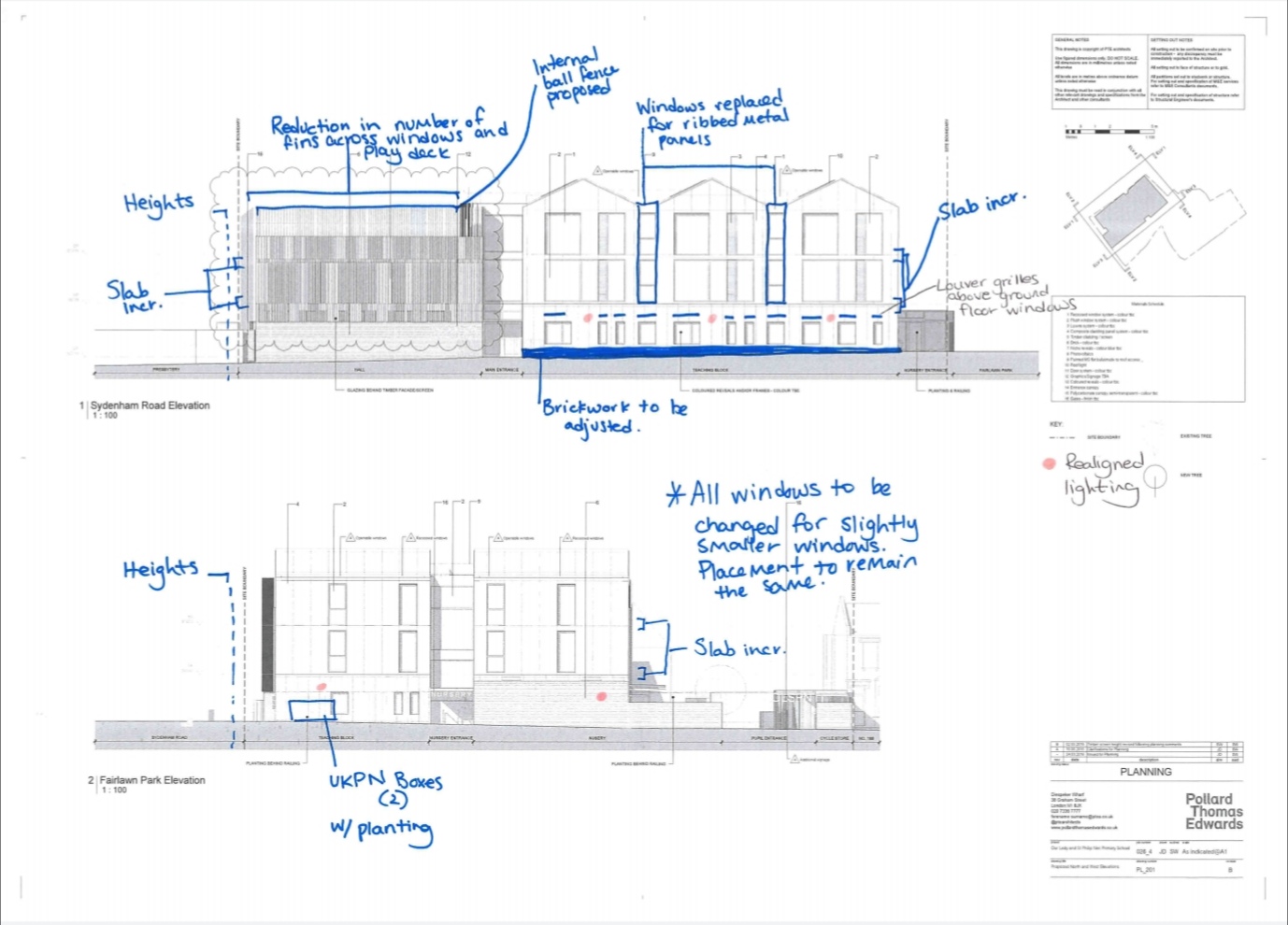 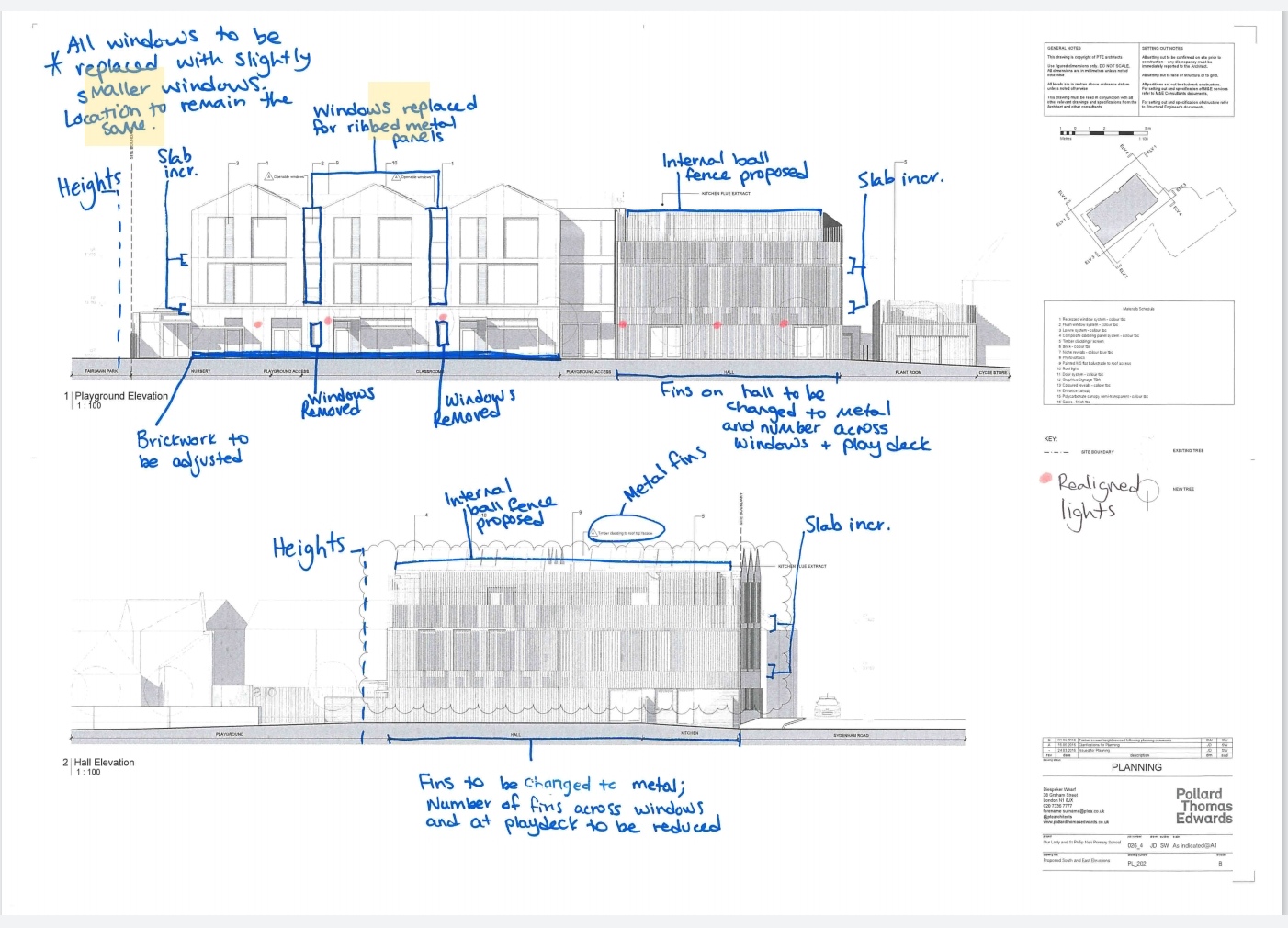 The extent of changes to the roof explains many of the problems with the current building. Roof lights and pitched roofs which allowed natural light and ventilation were abandoned in favour of maximising space. This makes the building dependant on mechanical ventilation and artificial lighting, quite again all green climate emergency policies. It is over a metre taller than the measured height of the permitted design, probably because the contractors poured the slab at too high a level, reducing excavation of a site that was hit by bombs in both world wars. Buried ordnance was considered a possibility, and an explosives expert was supposed to be on site at excavation. 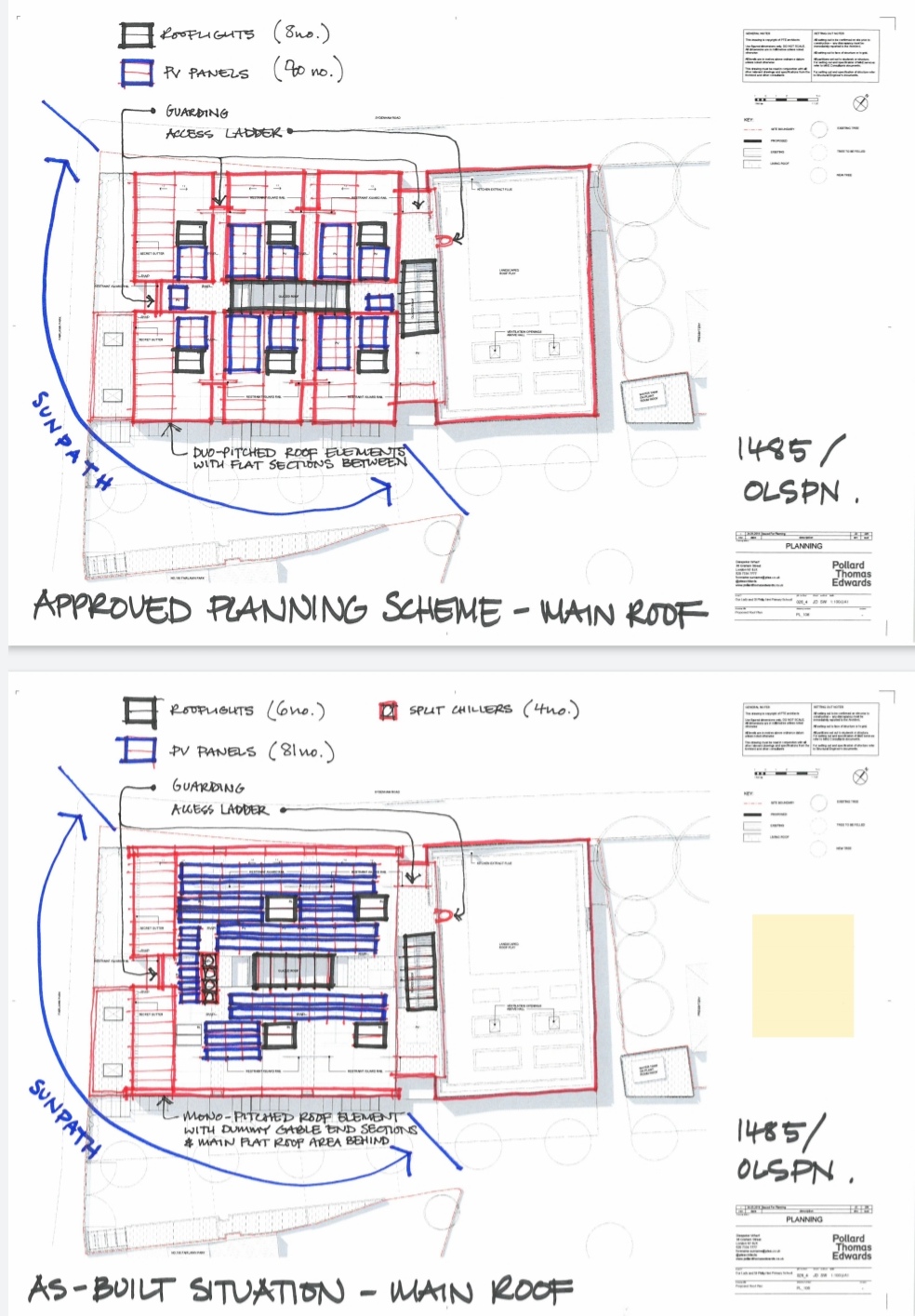 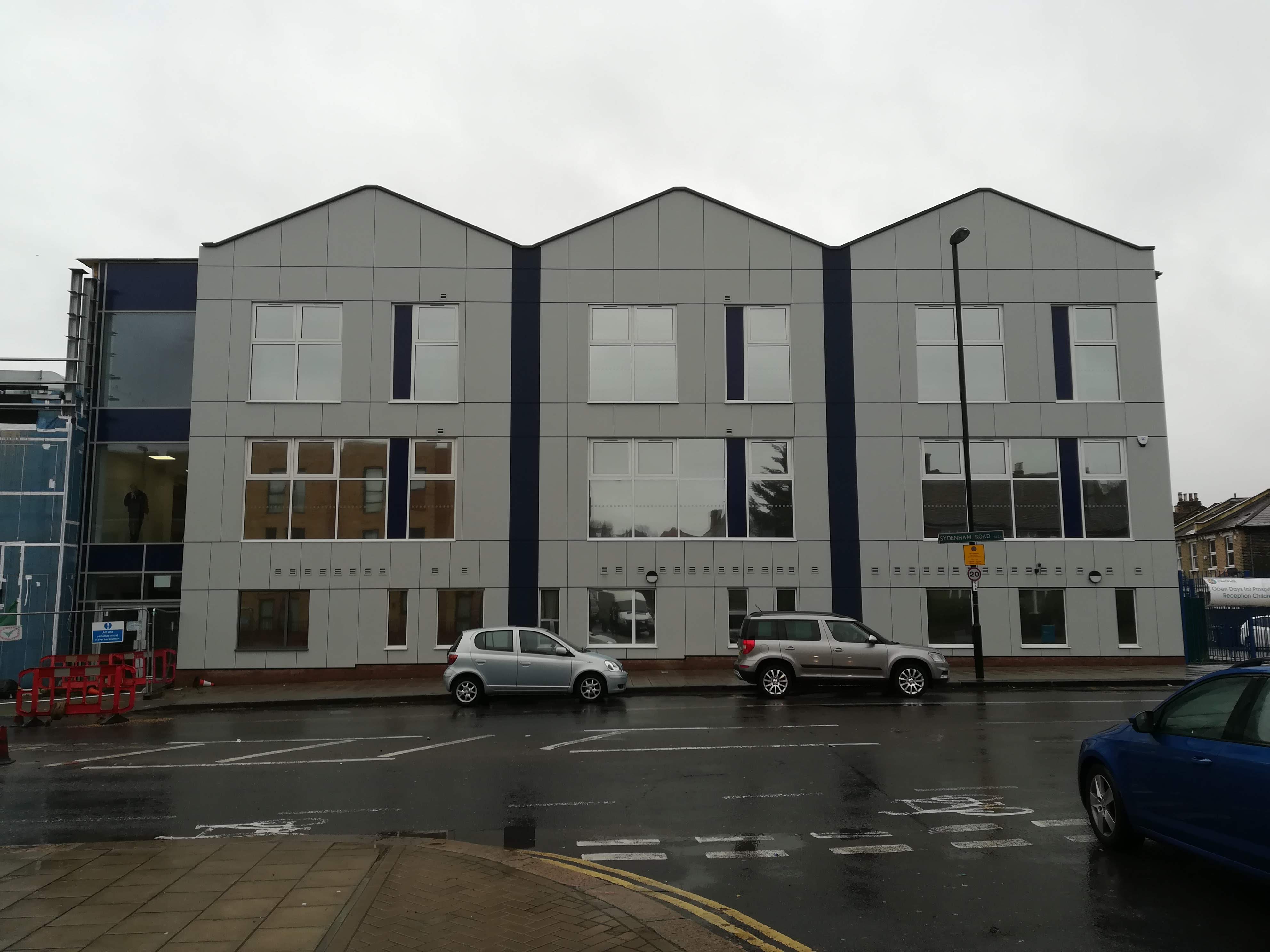 The OLSPN school redevelopment applicants have continually refused to submit correct paperwork, or to respond to council officers’ requests. Particularly worrying is the lack of documentation of ground investigation, given the site’s known contamination risks, including asbestos and wartime bombs.

All documentation should have been signed off before the school was occupied, and the Condition 4a (desktop assessment) should have been approved before any building work started. In fact, it was finally signed off in January 2019. 4b and 4c were due before the school was occupied, but remain outstanding. As the school continued occupation during the whole of the site works, this is unacceptable.

The relevant planning conditions are:
"4. (a) No development (with the exception of demolition to ground level) shall
commence until each of the following have been complied with:-

(i) A desk top study and site assessment to survey and characterise the nature and extent of contamination and its effect (whether on or off-site), and a conceptual site model have been submitted to and approved in writing by the local planning authority.

(ii) A site investigation report to characterise and risk assess the site which shall include the gas, hydrological and contamination status, specifying rationale; and recommendations for treatment for contamination encountered (whether by remedial works or not) has been submitted to, and approved in writing by the Council.

The development shall not be occupied until a closure report has been submitted to, and approved in writing by the Council. This shall include verification of all measures, or treatments as required in (Section (a) i & ii) and relevant correspondence (including other regulating authorities and stakeholders involved with the remediation works) to verify compliance requirements, necessary for the remediation of the site have been implemented in full. The closure report shall include verification details of both the remediation and post-remediation sampling/works, carried out (including waste materials removed from the site); and before placement of any soil/materials is undertaken on site, all imported or reused soil material must conform to current soil quality requirements as agreed by the authority. Inherent to the above, is the provision of any required documentation, certification and monitoring, to facilitate condition requirements.

Reason : To ensure that the local planning authority may be satisfied that potential site contamination is identified and remedied in view of the historical use(s) of the site, which may have included industrial processes and to comply with DM Policy 28
Contaminated Land of the Development Management Local Plan (November 2014)."

On the OLSPN development, Condition 4 documentation supplied was repeatedly rejected by Planning due to inadequate detail. Applications were refused in March 2017, June 2017. August 2017. In February 2018, application DC/18/105798 was validated, and on 29 January 2019, Condition 4a was approved, with reminders that 4c was outstanding. On 4 April 2019, the closing out report was rejected, because 4b & 4c had still not been satisfied. (4b having been brought up again due conflicting statements over soft landscaping).

Reason for refusal was given as:
"1. The submitted details are insufficient to discharge Condition (4) (B and C) Ground Investigation Works to that potential site contamination is identified and remedied in view of the historical use(s) of the site, which may have included industrial processes, and to comply with DM Policy 28 Contaminated Land of the Development Management Local Plan (November 2014).

I N F O R M A T I V E S
A. The applicant is advised of the comments below from Environmental Health:
Although the applicant has indicated that no soft landscaping areas are proposed
(DC/18/105798), the submitted close out report states that there will be and details
what remediation will be undertaken in these areas.

Unfortunately none of the Appendices have been included with the report which will be required, and before installation of the capping layer must be reviewed and agreed relating to the imported soil chemical data, and then photographic evidence validating the capping layer construction in soft landscaped areas."
Top

wow I'm surprised to see from the plans that this building was designed by Pollard Thomas Edwards. They are award-winning architects who have made some really good buildings in London and nationally.

Whatever will this saga unleash next? A plague of locusts?
Top

Historical fact. Check it out. Condition of development was an ordnance expert to supervise at the excavation phase. Feel free to check the paperwork before scoffing.
Top

I don’t understand. There was a school already there. Already built on “contaminated land” so why is it so relevant now?
Top

There was a sydenham society news letter about this. Red fonts and exclamation marks. "Shocked and dismayed". Starting to feel like a vendetta, and not terribly neighbourly.
Top

The old school buildings are supposed to have had asbestos within the structure, and no documentation of its safe removal has been registered, as required by planning. Yes, a school was already operating on site, but the redevelopment has involved deep excavations and major earth movements, undertaken when children were on site. Any contamination in the soil would previously have been capped by the tarmac playground and underlain the old buildings.

The only vendetta here is against Sydsoc, and the other objectors. Accusing anybody of malicious intent, when you haven't bothered to read the evidence, is pretty unfair. Everything is quoted from official documents, and planning and environmental health inspection reports. We just want the children protected from harm, and neighbours not to be put at risk. Almost 60 people turned up at a public meeting last year, to express concern about the development. We all deserve some respect as we see this process through.
Top

I notice you say you are concerned about the children. Delays to the building project mean that the children have to spend more time in an unfinished building/playground. You put posters up calling their school “a monstrosity” which upset and hurt children and their families. You are accusing the school of not following safeguarding procedures which isn’t true. I, as a neighbour, who looks at it every day, just want it finished. I agree, yes, it’s not the most attractive building. I used to look out onto the old prefab buildings which were also ugly. However, I would rather money went on education, teachers and facilities for the children.

I agree that Lewisham planning seem to have played a disastrous role in monitoring the build and they should be fined or action taken to make sure it doesn’t happen again, but it’s there now. I am interested to know what your ideal outcome is? Do you want the school to be demolished and rebuilt? Causing massive disruption to children’s education? Lots of money that could be spent elsewhere in the community. I personally will be gutted if work doesn’t go ahead in the summer holidays and that means a lot of disruption for me and probably a less enjoyable time in my back garden, but I just want it finished!
Top

Complaining about the building to the Pope was a particular low-point.
Top

As was saying that the children were not insured whilst in the building !
Top

TredownMan wrote: ↑20 Jun 2019 06:51 Complaining about the building to the Pope was a particular low-point.

From memory this was probably posted not by SydSoc but a well known person with a mission to spread disinformation, discord and disruption in our community and beyond. SydSoc might be well advised to firmly disassociate themselves from this individual.

Again to be fair SydSoc did apologise for this.

Can anyone please confirm the last date for consultation? On the Lewisham website it says 18th this post says 23rd, We did not receive a consultation letter but a neighbour did and on that it says 21st

Planning are processing comments first thing Monday, which is the deadline. Comments should be in by 9am Monday, to be sure of consideration. However, if you miss this deadline, it is still worth sending a comment in, as Lewisham may be lenient, given the problems with the planning portal. No guarantees though.

If you have access to Sydenham Library, I have downloaded the current plans onto a folder on the desktop of Computer 3. I will be in the library tomorrow morning with a complete printout of original and current plans, if anyone wants to consult them. Happy to help if anyone would like a look. I will be there until midday, but might possibly be able to come back later if you DM me with a time.
Top

Can anyone see any comments under the comments section on the Lewisham website regarding this development?
Top

While one can argue over the merits of this campaign, it's VERY welcome that the Sydenham Society have chosen to publish their full submission online. It would be welcome if this continues for other developments.