Go this PR from John and congratulations from me.

Owner, John Fried, started working for R. Woodfall in Peckham as a trainee Dispensing Optician when he was 23.  His boss knew George Purdom, who owned the practice in Sydenham Road and bought the business from him in 1970.

John became partner of the firm in 1975 and after gaining a huge amount of experience, bought the practice in 1986. Since then he and his wife, Ann, have grown the business, expanding it to it's current size with 6 practices over South London and Kent.  It's still very much a family affair with one of their three sons working alongside them.  John & Ann are big supporters of the local arts scene, sponsoring many musical and dramatic productions in Sydenham including several plays at the Sydenham Centre.

They have seen many changes in the high street over the 50 years with Kirkdale Book Shop and R. Woodfall being two of the only independent businesses standing the test of time.

John says 'I think people miss the personal touch and customer service of small independent businesses.  Our patients really appreciate the extra time we are able to offer them and the fact that we will go that extra mile.  In return, we really appreciate the loyalty our patients have shown us over the years.  We have patients who were with us 50 years ago and now their children and grandchildren come to us'. 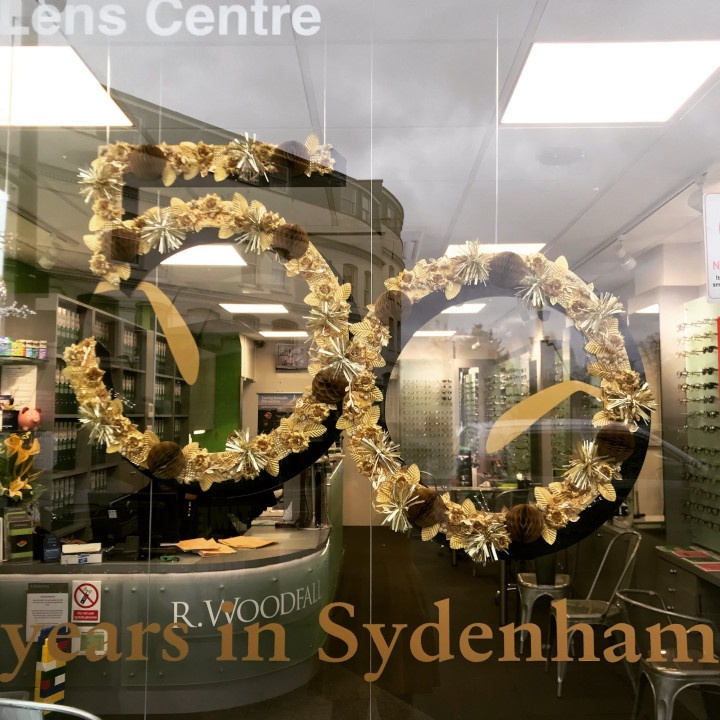 They offer a great service - I know I could get cheaper at other places but not the service and pleasure from being served by interested knowledgeable staff. I am more comfortable not treating my vision as a commodity - I prefer a relationship with opticians. It's not about the individual transaction - more about the long term assessment. A great place to go in Sydenham.
Top

Congratulations to them: I hope they'll be here for a long time to come.
Top

Need to remember to go down and buy some new glasses!
Top

If you need better quality lenses, e.g. thinner or lightweight ones or with corrections, they tend to be the same price at any optician (supplier catalogue price) so good service and after-sale service when paying a lot is valuable in itself - and Woodfall's are very good.

They do sell inexpensive lenses and frames which are fine for many people. Seemingly most people have non-matched eyes which is easy for muscles to compensate for when younger, but less so with ageing when posh lenses can become pretty much essential.

There's a Youtube somewhere showing how posh lenses are made, i.e. often much thinner, but also each is made to fit the selected frame so that you're looking through the right bit, as opposed to mass lenses where a standard "blank" lens is stamped out to fit the frame. (There's a reason why they cost so much more.)

Incidentally, there used to be means-tested help from the government towards cost of specs for which some might still be eligible, depending on whatever rules apply now.