We need a good news story and with a working assumption that humankind will survive the CV-19 pandemic, we need a planet to live on that is in good working order.

For clarity, it would seem the healing has nothing to do with the short-term consequences of reduced flights and fewer vehicle emissions brought about by our current crisis.


A scientific paper, published in Nature, heralds a rare success in the reversal of environmental damage and shows that orchestrated global action can make a difference.

The ozone layer is a protective shield in the Earth’s stratosphere which absorbs most of the ultraviolet radiation reaching us from the sun.

Without the ozone layer it would be nearly impossible for anything to survive on the planet.

The Indie report is here:

See - already we are heading for the sunny uplands, albeit very slowly.
Top

If there is any truth to the report, i.e. that near-zero CFCs has had a positive effect, rather than observational truth that could produce a perfect wrong conclusion, perhaps the biggest take away is that damage caused by humankind might not be permanent and that somehow the earth can mend itself, albeit slowly. That is far better news than merely having halted further damage.

It's undoubtedly true that the earth will remain whatever man does. Life forms of any sort might not, but the planet will even as a sterile rock. The sooner we stop trying to make it one the better.
Top

Angela, that's an interesting view.
According to Wikipedia:

the human race sent representatives to a conference held in Montreal in 1987 which agreed the Montreal Protocol, an
international treaty designed to protect the ozone layer by phasing out the production of numerous substances that are responsible for ozone depletion. It was agreed on 16th September 1987, and entered into force on 1st January 1989. Since then, it has undergone nine revisions, in 1990 (London), 1991 (Nairobi), 1992 (Copenhagen), 1993 (Bangkok), 1995 (Vienna), 1997 (Montreal), 1998 (Australia), 1999 (Beijing) and 2016 (Kigali). As a result of the international agreement, the ozone hole in Antarctica is slowly recovering. Climate projections indicate that the ozone layer will return to 1980 levels between 2050 and 2070. Due to its widespread adoption and implementation it has been hailed as an example of exceptional international co-operation, with Kofi Annan quoted as saying that "perhaps the single most successful international agreement to date has been the Montreal Protocol". In comparison, effective burden sharing and solution proposals mitigating regional conflicts of interest have been among the success factors for the ozone depletion challenge, where global regulation based on the Kyoto Protocol has failed to do so. In this case of the ozone depletion challenge, there was global regulation already being installed before a scientific consensus was established. Also, overall public opinion was convinced of possible imminent risks.

The two ozone treaties have been ratified by 197 parties (196 states and the European Union), making them the first universally ratified treaties in United Nations history.

These truly universal treaties have also been remarkable in the expedience of the policy-making process at the global scale, where only 14 years lapsed between a basic scientific research discovery (1973) and the international agreement signed (1985 and 1987).

That seems to contradict your suggestion.
Top

Not really. If a virus were to wipe out humankind - or just civilisation as we know it - then the planet's environment would be saved, no eco warriors or Montreal Protocols required. That's the logic of the Gaia thesis - is it not?

I suppose that's OK if you ain't human. It's humans thinking that way that disturbs me. I sorta rebel against extinction. Is that selfish?

Extinction Rebellion - got a kind of ring to it really.
Top

Oooops. Is it so safe to think about getting back in the water ?


Record-size hole opens in ozone layer above the Arctic

Maybe not as bad as it first seems.


A rare hole has opened up in the ozone layer above the Arctic, in what scientists say is the result of unusually low temperatures in the atmosphere above the north pole.

The hole, which has been tracked from space and the ground over the past few days, has reached record dimensions, but is not expected to pose any danger to humans unless it moves further south. If it extends further south over populated areas, such as southern Greenland, people would be at increased risk of sunburn. However, on current trends the hole is expected to disappear altogether in a few weeks.

Low temperatures in the northern polar regions led to an unusual stable polar vortex, and the presence of ozone-destroying chemicals such as chlorine and bromine in the atmosphere – from human activities – caused the hole to form.

And an ominously stark forecast of what we might return to.


“However, this is a reminder that one should not take the Montreal Protocol measures for granted, and that observations from the ground and from satellites are pivotal to avoid a situation where the chlorine and bromine levels in the stratosphere could increase again.”

Edited to add: - Just had to include this lovely pic. 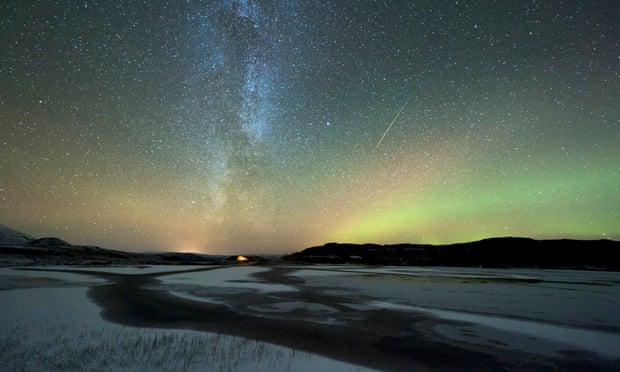