I see that our local Labour Party is gearing up for the Mayoral contest next year:

I'm very much in two minds about this. I'm a strong supporter of Ken's transport policies, and I've recently come round to seeing the need for higher rise residential developments in modern cities - see more in the book by US economist Ed Glaeser, The Triumph of the City where Ken's policies are strongly endorsed.

On the other hand, I feel fairly queasy about the political judgement of someone who embraced Sinn Fein and only three years ago - literally - 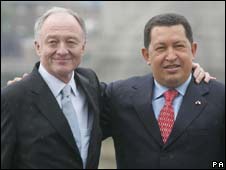 someone who backed Gaddafi to the bitter end

I think I'd prefer our local pols to be focusing on things which affect Sydenham directly, but I guess that's just (part of) the price they pay for tricking themselves out with a worn out national political label.
Last edited by Tim Lund on 12 Nov 2011 13:03, edited 2 times in total.
Top

I agree Tim . Is not he getting a bit old for Mayor anyway.

I will be supporting Boris , the hero of most true Londoners.
Top

Eagle wrote:I agree Tim . Is not he getting a bit old for Mayor anyway.

I will be supporting Boris , the hero of most true Londoners.

Me too Eagle,
too many people have forgotton the ILEA and the amount of money that was wasted!
to me it would be like bringing back Derek Hatton! ( what happened to him in the end?)
Top

Derek Hatton made a successful career as a broadcaster.
Sinn Fein are a legitimate political party with 14 seats in the Dáil.
Ken Livinstone is 71.
Top

I definitely won't vote for Ken. Remember all the Ken branding? His face was everywhere ... buses, tubes ... nowhere was safe. Mao Zedong had less posters.
Top

Derek Hatton made a successful career as a broadcaster.

Did he? was he ever procecuted for all the money that was (mis) "used" ?


Sinn Fein are a legitimate political party with 14 seats in the Dáil.

Shame people had to die for them to get there though eh?

mmm, past retirement I think
Top

Shame he is taking up the job a younger person could do.

You can't really criticise Ken for his support for Chavez and Gadaffi, at least not without mentioning his support for the Iranian regime (http://hurryupharry.org/2011/01/20/livi ... -press-tv/).
Top

I think Ken should concentrate on creating babies,he wont have any energy left to run London!

Someone on a par with Red Ken in my eyes, is George Galloway,
Can't sections of this population see he uses them to further his own career?
Top

Yes I read about his sperm distribution. With over 7 billion a man of 66 or 71 should be ashamed trying to increase the population.

I to remember the endless leaflets with his picture on every page that sailed through our doors at our expense. Again disgrace

He will probably make Bengali the official language in Tower Hamlets.

Let us hope the good sense of the populace will retain Boris.
Top

i'd rather have a dishevelled,bumbling baffoon,(but with good morals)
than a sly,underhanded creep in charge of my money.
Top

i lost al respect for ken livingstone afterhe apologised to blacks on my behalf for slavery. i'm not sorry abouut slavery coz i was nt involved

A senior politician apologising for the harm done, and continuing to be done, by the slave trade and its legacy, is long overdue. This wasn't the only good thing that Ken did as mayor of London while the list of landmark projects by Boris that have made a difference seems to start and end with bicycles.
Top

The Election has started early in SE 23.

Was it Hugh Paddick who was the 3rd party candidate. Maybe will do it this time.

I objected very much to Livingstone's forays into foreign politics. Also why did he support St Patrick but not St George.
Top

Brian Paddick I think Eagle,
and yes, why are we discouraged from celebrating St George?
I liked it when Margaret Thatcher was in charge! at least we were proud to be English/British.

Ken spent his way into being elected,he has no respect for the hard working people of this country.

I think I was descriptive enough about good old Boris!

Annie wrote: I liked it when Margaret Thatcher was in charge! at least we were proud to be English

"If you had to draft in one of the last ten Prime Ministers (in their prime) to help out right now and put Britain back into shape, who would it be?"

Sir Alex Douglas Home.
Nearly won in 64 , despite taking over from Supermac in 63 when Labour well ahead.
Top

I think Maggie Thatcher was possibly the most damaging Prime Minister in my lifetime. Weird how we look back on it with rose tinted spectacles. I remember the first 3 years she was in power, then the cuts, the jobless, the strikes, the riots, the rise of banking and the destruction to manufacture, the greed is good era. Community seemed to suffer, jobs for life came to an end, many lost pension entitlements when business was privatised, cartels came about from privatised businesses, tax went up (VAT rose from 8% to 15%, government spending went up (sounds incredible doesn't it?) although tax was reduced for the most well off. We lurched from one recession to another under her iron hand. If it wasn't for the fact that we went to war I doubt she would have won another election after 1980. Interests rates went sky high, many lost the houses they had been encouraged to buy after selling off housing stock at rock bottom prices. At least she sorted the unions out as they were far too powerful initially, but even then she went too far. She supported Pinochet, a brutal dictator and thought Mandela was a terrorist. She was against society saying 'There was "no such thing as society, there are individual men and women and there are families."' She manipulated press reports coming back from the Falklands (something I never knew about until years later) and abolished the GLC because she didn't like the democratically elected people running it.

Ken wasted his time as mayor. He did make a difference to London but I feel that power went to his head a bit. Boris stands up for London against his party. In effect, whoever is in power as head of a team of advisors and public servants will be hard pressed to mess things up as there are a lot of good ideas out there. All politicians want less crime, more work, more vibrancy, my stuff going on, lower costs, less waste. it's just a case of picking someone you believe will build a team to deliver it. Having worked with City Hall I'd say Boris is quite good at that.
Top

I assume you were not an adult in the last Wilson and Callaghan governments, otherwise doubt if you would make those comments.
Top
Post Reply
65 posts