Fairy Archipelago at the Crystal Palace 1903

Fairy Archipelago at the Crystal Palace 1903

“A Fairy Archipelago at the Crystal Palace”

Many striking attractions are imminent at the famous Sydenham Palace of Pleasure, among them the “Fairy Archipelago” on the lake of the North Tower Gardens. It was officially opened on Easter Monday of last year, but this, in racing phraseology was but a “preliminary canter.” However, it was sufficiently indicative of future prodigality of pleasure-giving. The “Syndicate” are quite satisfied with the progress they have made and are making, and exhibit a reassuring composure as to their ability to be “all right on the night.” It is one of those enterprises which depend largely upon climactic conditions, and is practically a gamble with the weather. Therefore the real success of the undertaking will arrive coincidentally with the advent of our tropical suns and Italian skies. When the wind “bites shrewdly,” you cannot expect people to disport themselves in the neighbourhood of an airy archipelago. Those blessed with a fairly lively imagination can, even in the teeth of an easterly wind and beneath the dome of a dull grey sky, easily realise what a charming and novel spot this will be. Rocks – or a wonderfully realistic counterfeit presentiment of them – water, and verdure on all hands : a variety of stalls, all fashioned like rude huts, offering an abundance of attractive articles at popular prices, are built over the water and into the rocks; there are toys, confectionary, photographs, slot machines innumerable, shooting-galleries, roasted peanuts and popcorn, and automatic musical instruments which mingle the dulcet tones of “Dolly Grey” with the sweet strains of “The Honeysuckle and the Bee.” On no account fail to take a trip in an electric launch ‘ it is a real treat to glide over the surface of the water, through mysterious caves, under rustic bridges, past elaborate pavilions gay with bunting, the envied of all onlookers who are unable or too penurious to plunge a sixpence !

It would be equally inadvisable to fail to take a flying trip down the chute (the longest in the world), or to valiantly shoot the rapids. The latter is a new sensation, and may be highly recommended for sluggish livers. You descend with the tide – in a boat, of course – on a varying gradient, gathering velocity as you speed. Near the bottom you encounter a sharp curve ; here you just leave yourself to Providence and the boat and swish round the corner. When you come out of the trance, you find yourself on level water.

Mr. Mann, who is at the head of the syndicate, points out that the weather last year was about as bad as it could be for them, with the natural result that they fared somewhat indifferently, but, at the same time, he contends that “a Mannis a Mann for all that,” and promises many additional attractions this year. In fact, it is to be a second and higher bid for popularity.

Par example, there is to be a spacious dancing-platform, along the edge of Sydenham’s fair waters, upon which – the platform, not the waters – terpsichorean couples may foot it to their hearts’ content, and the sweet strains of a well-equipped band, at all times, and almost at any time. There will also be some convenient alcoves, cool and pretty, where exhausted dancers may dally, and “wall-fruit” cling ; and – list, ye thirsty ones ! – a fine refreshment-bar. May it never know a Black List ! Right in the middle of the lake, between the chute and the dancing-platform, there will be holden an Old English Industrial Fair, where practical demonstrations of weaving, clay-modelling, wood-carving, &c., will be given. It is expected that this will be officially opened by a prominent Society Lady.

Located near the dancing platform – it would be seen that is the general coign of vantage of the Archipelago, like Dan Leno’s step of the refreshment-bar at the Tower – there will be a Biograph in good and constant working order. Od side-shows there will be an abundance. You will be able to make the acquaintance of the “Human Spider,” enter the “Haunted House” (in which you will experience the strange sensation of standing on your head without falling); the “Palace of Illusions” you will find it hard to resist or dispel, and many other attractions will make you bless the moment when you recklessly flung down your shilling at one of the Palace turnstiles.

There will also be “musical rides” in a thirty-foot ring. Anybody who can mount a horse, and having mounted it, keep his seat, may ride to music supplied by a band. Much fun of an exciting character may be expected in this department.

The whirling roundabout, and the flying swing will be in evidence, and you may “Try a shot, sir,” at the “Niagara Ride Range,” where many breathless contests take place for the greatest number of “bulls,” “magpies,” and “outers,” with the accompanying honour of not paying for them.

All the elaborate and mammoth scenery has been painted by Mr. John England, who has supplied the “settings” for many a notable Sydenham production. He is an old pupil of Mr. T. E. Ryan.

All things considered, it must be admitted that the approaching season in the North Tower gardens of the Crystal Palace promises to be both entertaining and alluring. 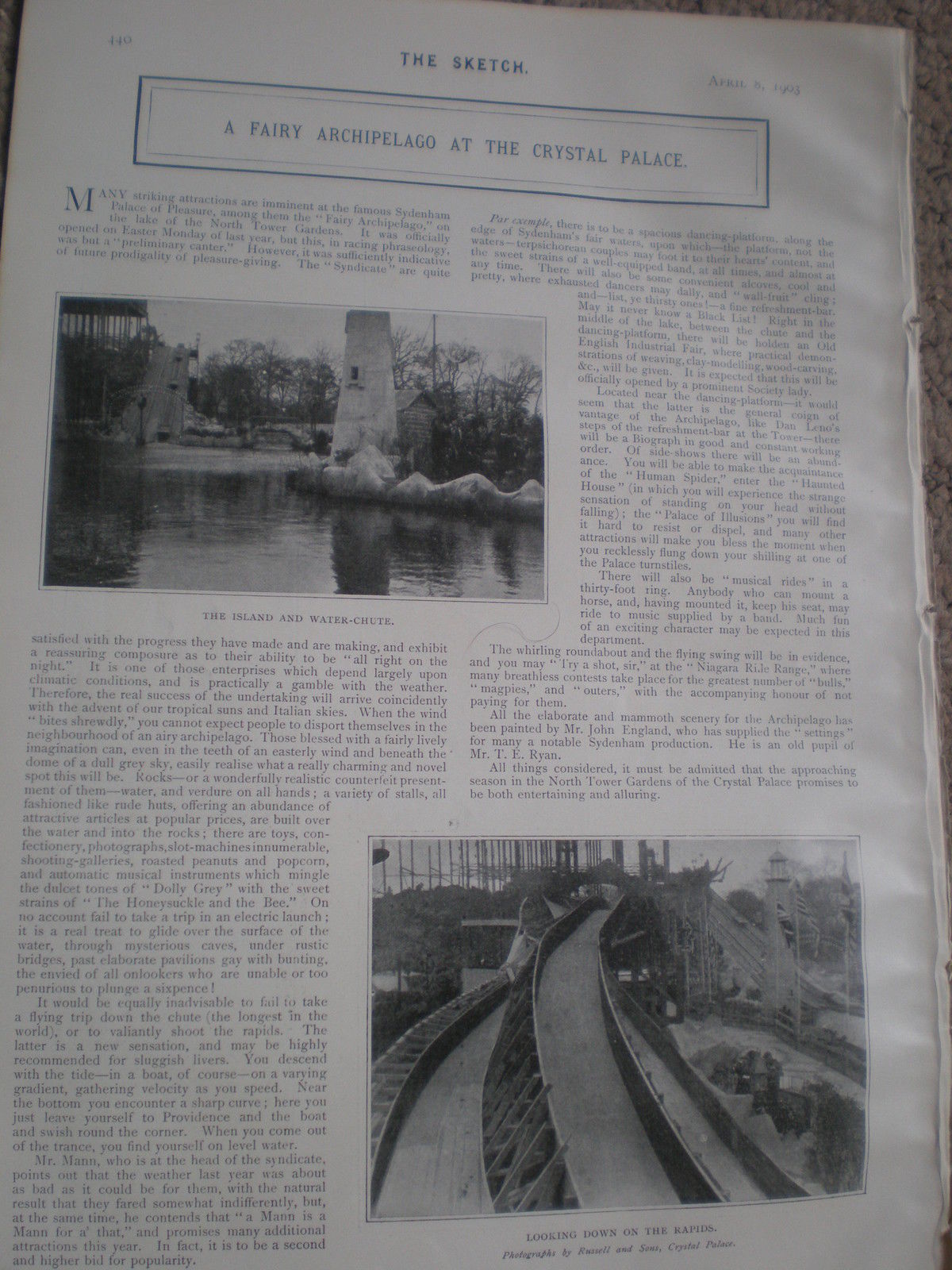