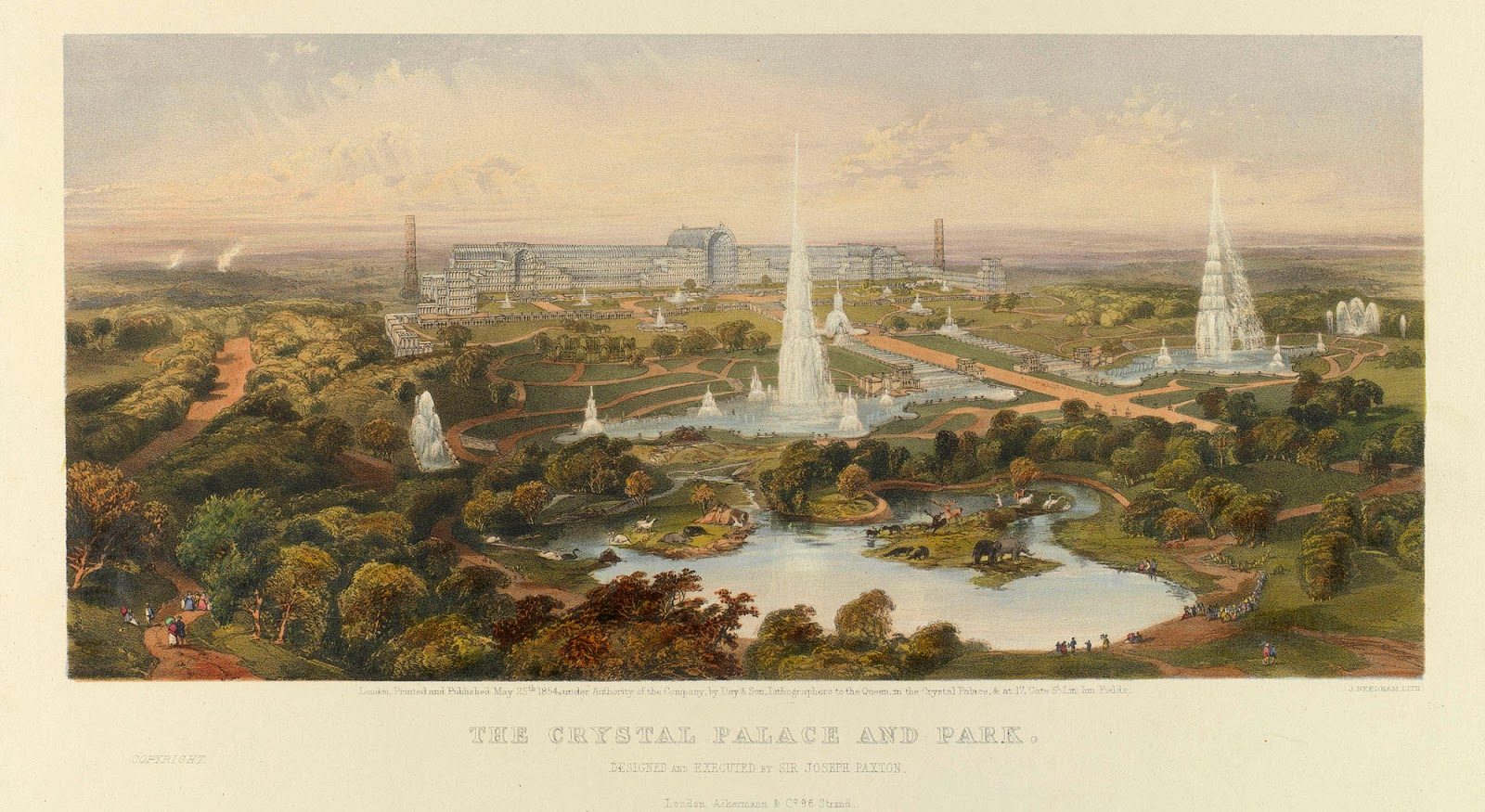 The lower terrace was laid out geometrically with paths and flower beds with many white marble statues and urns amongst the fountains.

Another terrace wall lead beyond to a more natural park landscape with the Grand Fountain [with more statuary] and two side fountain basins, before one reached the two water temples and cascades leading to even more fountains !

All that remains of the marble statuary today - by the Rangers Hut in Crystal Palace Park . 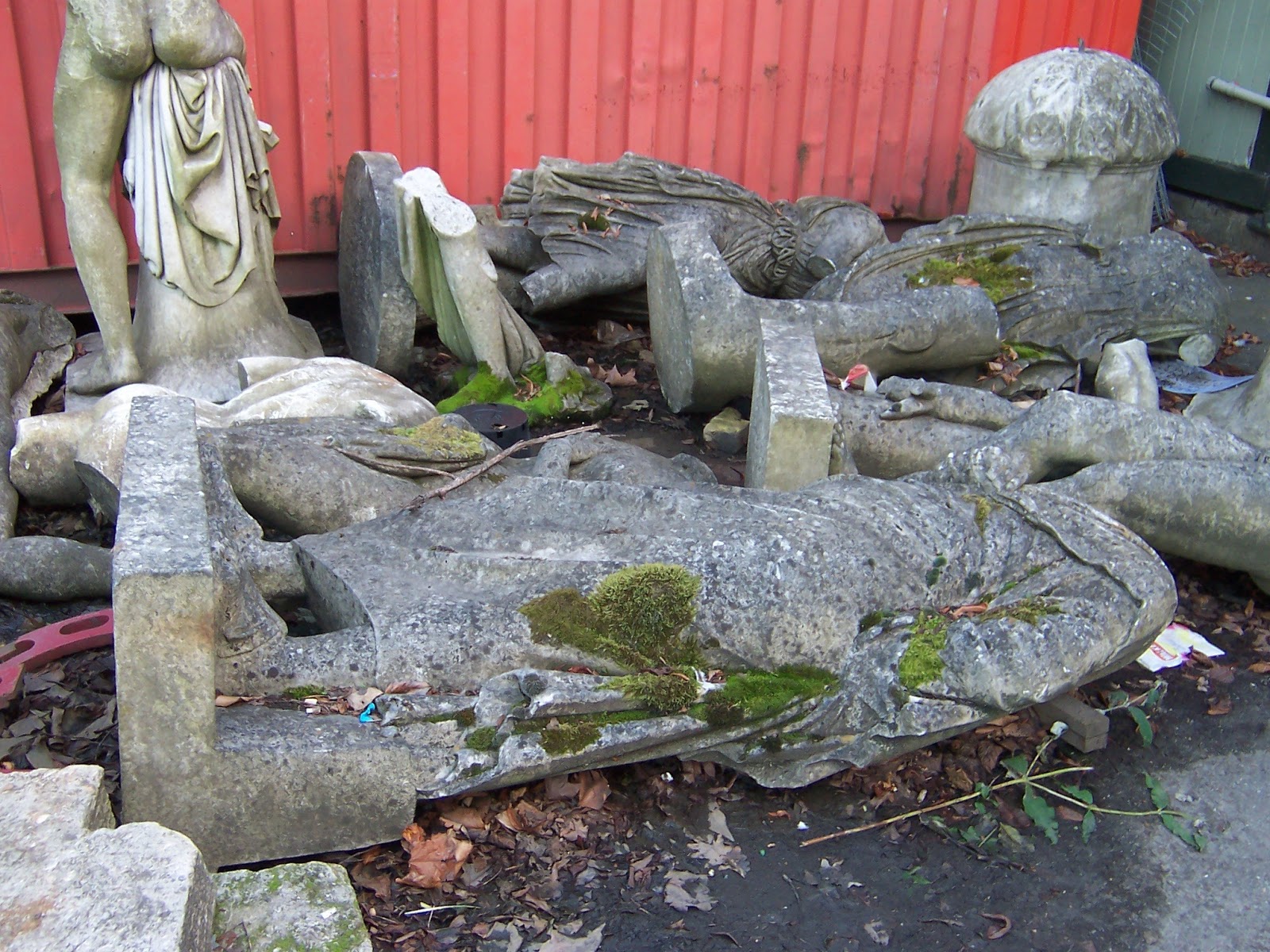 When they were up by the Museum in the 70's. Thorwaldsen's "Shepherd Boy" has since disappeared and "Andromeda" has lost her head! 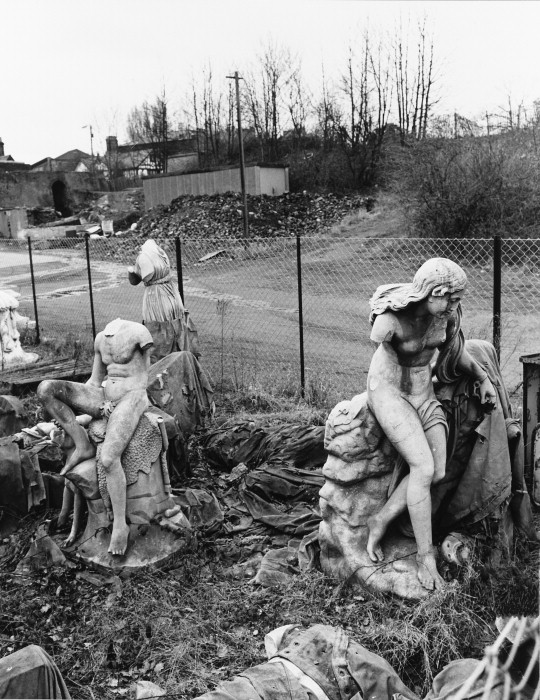 I calculate that there were about 77 sculptures in Crystal Palace Park.
I hope to show what they were, and in some cases, what remains.

There were 12 sphinxes [what's the plural?] placed at the entrances to the building from the park. Only 6 remain, just!

They were all cast from this original in the Louvre.

There were pairs either side of the main entrance to the building.

Good idea for a topic! Can I suggest something? It would be better if you included a plan or something to show exactly where these statues resided in the park, like you did for the interior statues.

Are you sure you've covered all the statues of the lower terrace? In total, I'm sure there must have been a lot more than 77 in the gardens/park.
Top 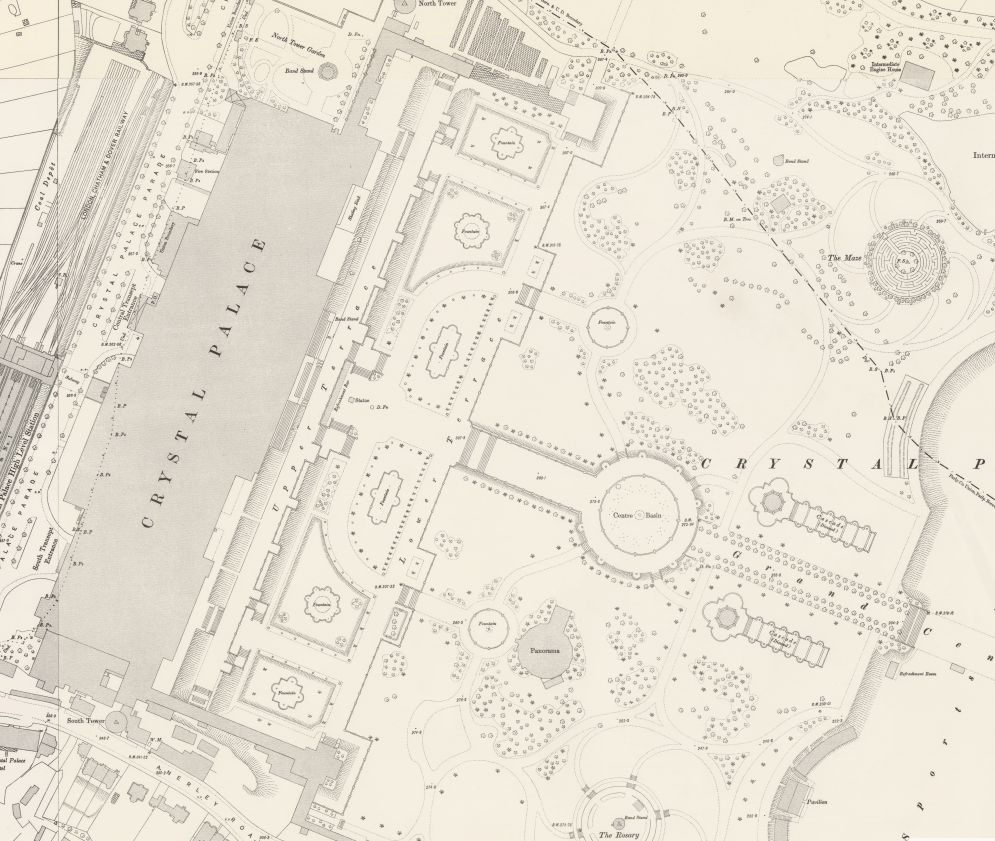 The "Guide to the Crystal Palace and Gardens" states that 26 statues personifying Cities and Nations important to trade, stood on the upper terrace. This must be innacurate as only 24 were ever present. These 24 statues were also not arranged as described in the guide.The subjects ARE listed by sculptor and subject. With very few photographed well over the years, it's will probably always be near impossible to show them all clearly.

I've numbered them by all the 26 possible plinths that a statue could have stood on.

Image below (from right to left) shows an empty plinth #1 (later to have an urn) and then a figure holding a fork on plinth #2, and then "Liverpool" by Benjamin Edward Spence on plinth #3. The Sphinxs to the South transept are on the left and (recently restored) and still exist in situ. 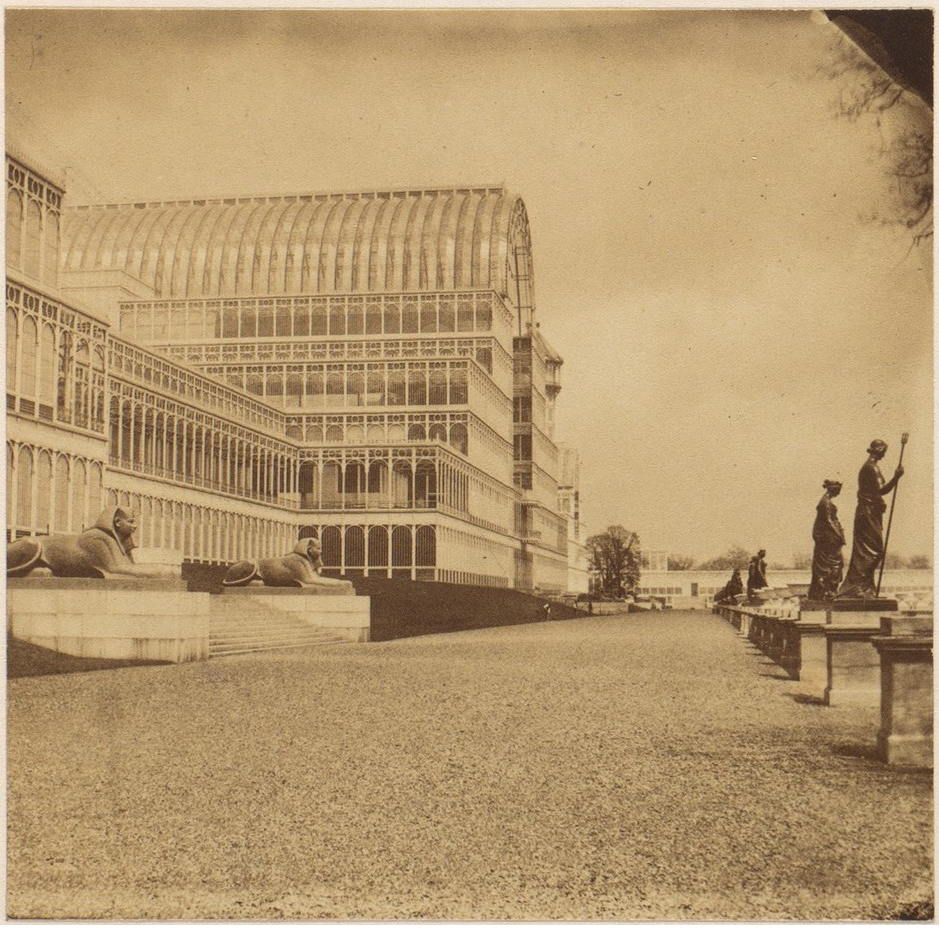 Plinths # 4, 5 and 6. Only the figure on the right remains, headless and armless! 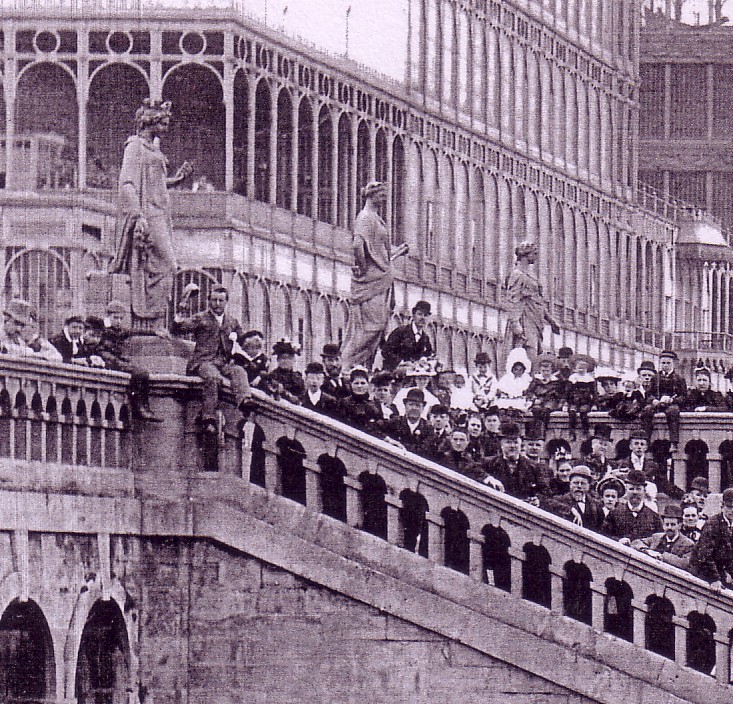 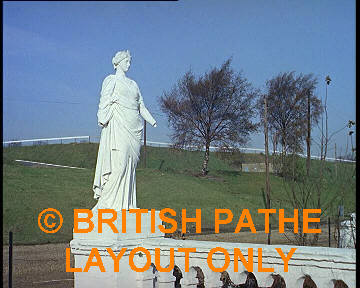 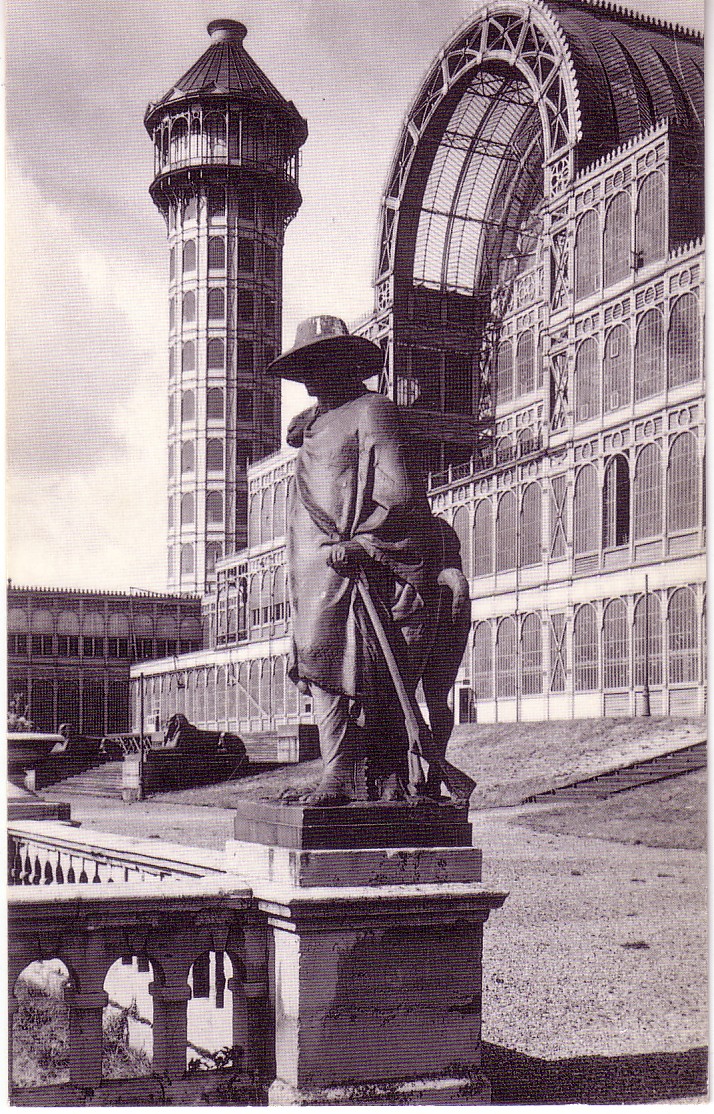 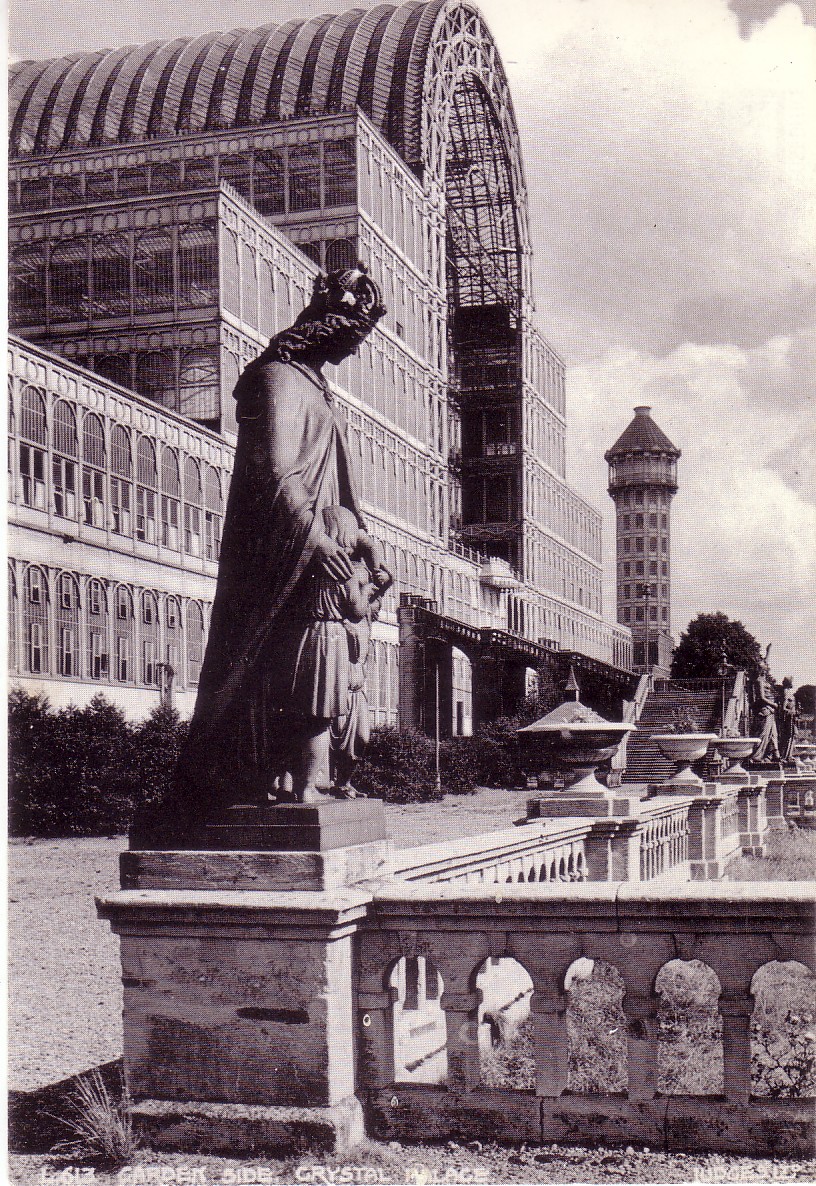 This was the only statue fully described in writing.


"The Northern states of Germany, which have entered into a bond for mutual protection in custom-house duties and commerce, are denominated ZOLLVEREIN. The idea is here represented by a grand female figure, wearing the imperial crown and mantle, and protecting a boy and a girl, the former carrying a specimen of the raw material, and the latter holding the manufactured web. This work is very nobly concieved."

The whole statue and plinth are missing by the time "The Pleasure Garden" was filmed so this was likely to have been destroyed before it could have been sold off in the 1957 sale. 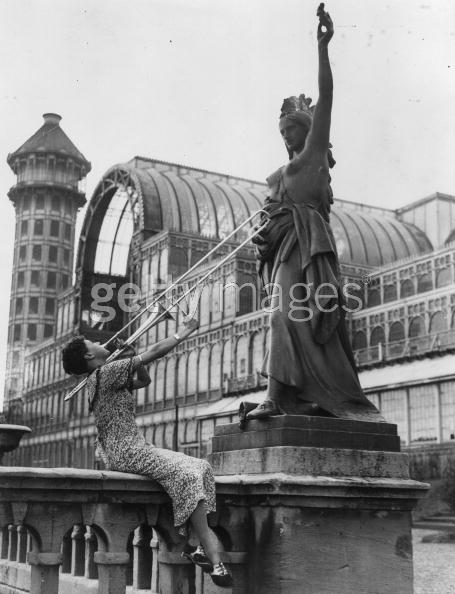 1911 festival of Empire. George V and Queen Mary walk down the newly erected steps from the ground floor out to the upper terrace. 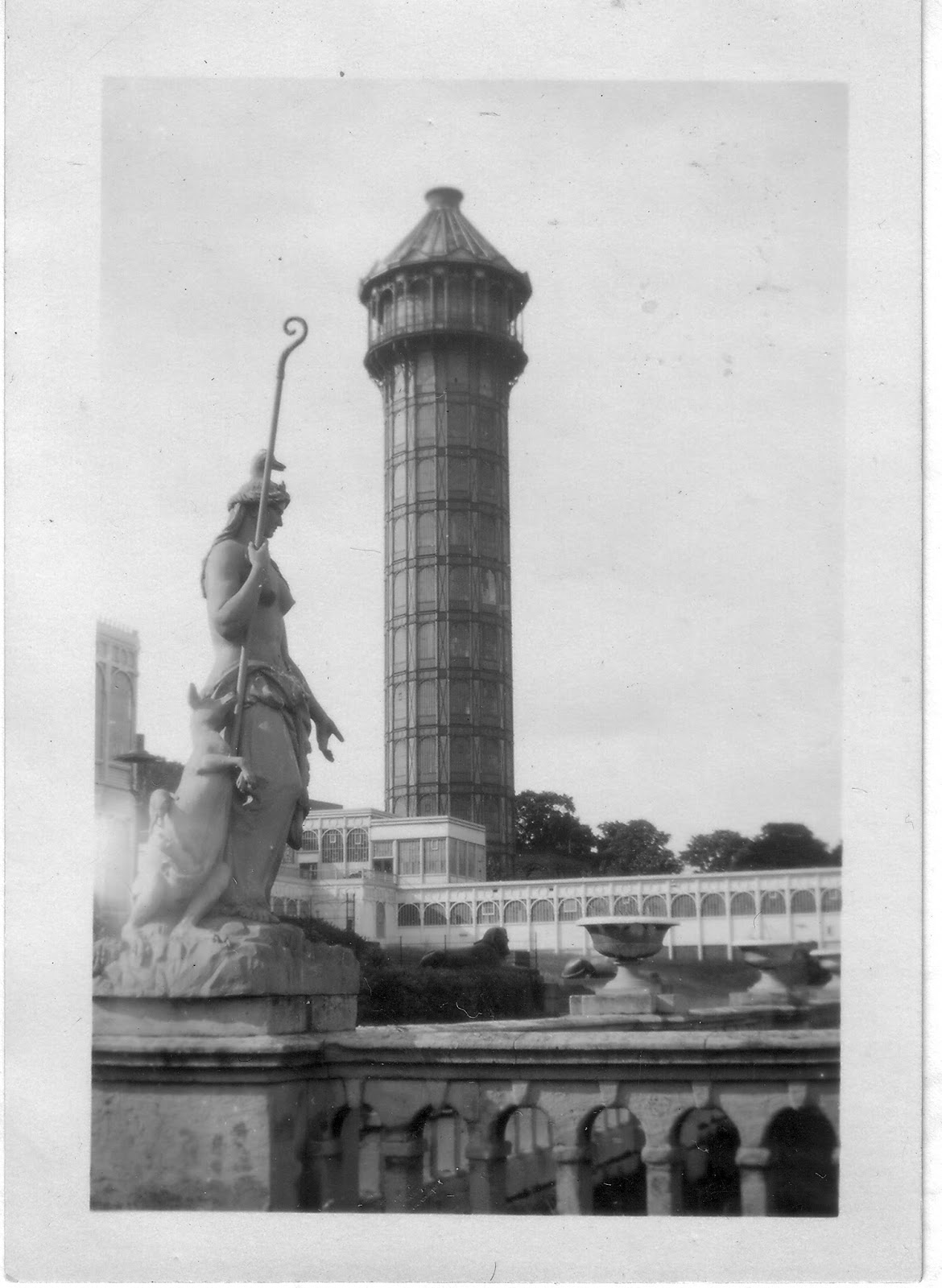 If it will save you a trip, you could always scan the map in 2 parts, and I can stitch it together for you. I have to do this all the time with lobby cards because they're usually only A3 as well.
Top

One thing that really puzzles me is when and why were the fountains destroyed? Barcelona have incredible fountains which are an incredible tourist attraction. Such a shame.
Top

What an amazing piece of work! But where are the statues now?
Top

English Landscapes had the brilliant Idea of dumping a load of leaves\earth over 1 remaining statue a while a go and to my knowledge its still buried.
Top

Starting from the south 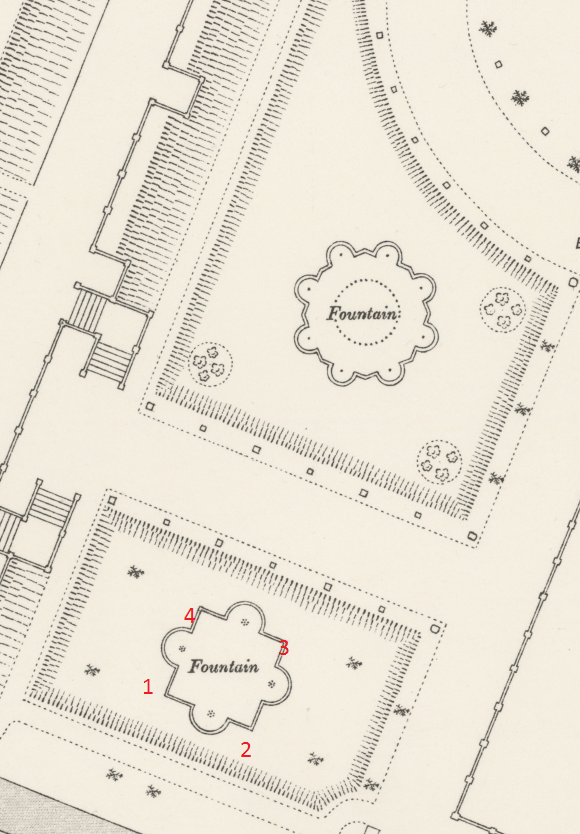 "Your message contains too many URLs. The maximum number of URLs allowed is 6."
Last edited by tulse hill terry on 8 Apr 2018 15:26, edited 5 times in total.
Top

Hi ,
have you got any pictures of Paxton's Bust in its original position , as i understand it used to face the Palace , and i have never seen one

The bust was actually on the top site by the palace it self at one point, there are photos of it up there but as a very rushed look can't find the ones I want.

But here are some stills from "The Pleasure Garden" and the "Phoenix Tower" with him facing the palace and also the central fountain before it was replaced with a central concrete seating area.

EDGE OF THE LOWER TERRACE

MELPOMENE? by ? [Taken at the 1957 sale of Crystal Palace statues.]

GIUSTINIANI MINERVA - Classical [original in the Braccio Nuovo of the Vatican]

MAIN STAIRS. Initially the Diana de Versailles and the Apollo belvedere were placed either side of these, on the corners of the semicircular projections, but they were moved sometime later.

Just wondering if you know when the sphinxes for the North Wing were removed?

Can't recall seeing any images of them at all, I know from footage of the North Tower demolition they weren't there in 1941. So I am guessing they were removed when the palace was still there.
Top

Image of the Grand fountain taken from the roof of one of the water temples - this view is often printed in reverse.

The copy used by Paxton at Halifax People's Park, 1857.

All that remains at Crystal Palace Park.

And all that remains in the park today.

PARIS, son of Priam the King of Troy. Original in British Museum

At Chatsworth, and an example of what inspired Paxton at Sydenham.

The 'original in the British Museum.

A Glimpse on a Delamotte image [detail].

All that remains in the park today.

SPRING? FLORA? by Raffaelle Monti ? [Apparently this is for sale at the moment.]

With urns and fountains designed by Raffaelle Monti.

Only other thing I could think is it getting damaged during the winds\fire in the 1860s.


Best photo I can find for one of the terrace statues that you've not put up yet.

Thanks for the pics...Really interesting.

I'm sure the recling statute [Pacific?] in Dacres Road [along from Forest Hill Boys' School] used to be in the Crystal Palace Park grounds?
Top

Fabulous pics mate, some i`ve not seen before. Thanks for those.
Top

Just wondering if you know when the sphinxes for the North Wing were removed?

"THE STAGE AT THE OPEN-AIR CAFE CHANTANT." Crystal Palace Sydenham. From the General Guide 1901.

I can't yet find the image from "Black and White" that must have been taken from the top if the aquarium, showing that this theatre stood at the top of the steps from the upper terrace to the North Wing. It shows that the sphinx er . . . [what IS the plural for sphinx?] had been removed by then.

You're welcome Trawlerman, and Budweiser, "Pacific" is mentioned above, as well as in these two threads.

"Where Are The Crystal Palace Statues Now ?"

[with lovely photo by Steve Grindlay]

I'd love to hear of any sightings, especially of the marble "Love Abandoned" which was bought in the 50's by a Polish sounding gentlemen from West Wickham.
Top

Unrelated, I know, but what's the latest photo you have of the big fountain basins at the bottom of the park?

I'm not sure when they went, but before the race track and football stadium?
Top

Don't worry, I intend to cover the fountains in this thread at some stage.

The latest I can think of must be from the 1890's when a model of the as yet unbuilt Tower Bridge was erected on the fountain basin that became the football stadium, while the other was turned into a cycle track.

It would be worth reading Patricia Spencer Silver's two books on her ancestors:

Pugin's Builder: The Life and Work of George Myers [who built the Foreign Industrial Court

They are certainly gone by the time the 1911 Festival started and put paid to the Water Temples.

There's probably more already on this forum, but finding it is the issue.

I looked for the pictures by Arthur Talbot in Bromley Archives, that Falkor posted, covering the demise of the cascades, and finally gave up.

That's the problem with lumping everything together under "Rare" I feel.

EDIT: Found it under "What is the history behind the name of "Jews Walk"